In this summary, we analyze the heights of NBA Players based on position and nationality, specifically players who played in the NBA in the 1990-2020 period.

Let's break it down by position and by nationality. But first..

The Average. The average height in the NBA is 6' 7 (201cm), whose company includes prominent players like Paul Pierce, Reggie Miller and Clyde "The Glide" Drexler.

Compare the stats of Reggie Miller with Clyde Drexler.

Tallest/Shortest. The tallest and shortest  players are well-known to most NBA enthusiasts - they are Gheorghe Muresan at 7'7 (231cm), and Muggsy Bogues at 5'3 (160cm).

Compare the stats of Gheorghe Muresan and Muggsy Bogues

The above represents only a partial dataset — click here to rank, query and segment all 2169 data items on the full dataset.

Break it down by position.

NBA Centers. The average height of NBA centers is 6'11 (211cm). NBA centers standing at 6'11 include Tim Duncan and Bill Walton.

Shortest Center. At 6'6 (198cm), Chuck Hayes is one of the "shortest" players at the center position - in fact, during the 2009-10 season with the Houston Rockets, Chuck Hayes helped out as the starting center, replacing the injured Yao Ming.

NBA Forwards. The average height of the forward position is 6'8 (203cm), usually a small forward position, by versatile players such as Tracy McGrady and Dominique Wilkins.

Tallest Forward. The tallest forward (power forward) stands at 7'3 (221cm) - the height of Kristaps Porzingis from Latvia who plays the forward-center position for the Dallas Mavericks.

NBA Guards. the average height of the guard position is 6'4 (193cm) - skilled ball handlers and shooting guards such as Dwyane Wade and Gilbert Arenas.

Compare the stats of Dwyane Wade and Gary Payton

Tallest Guard. The tallest guard stands at 6'10 (208cm) - the height of the dominating Ben Simmons who plays the guard-forward position.

Now, let's break it down by countries..

Generally, we list the tallest basketball players from countries with at least six NBA players playing between 1990-2020 (with exception of Romania).

The Big Three. By countries, Romania tops the list with Gheorghe Muresan as the tallest NBA player 7' 7 (231cm). Tied at second, are USA with Shawn Bradley and Sudan-born Manute Bol (both at 7' 6) and China with Yao Ming at 7' 6 (229cm).If China's Sun Ming Ming, 7' 9 (236cm) and also the world's tallest professional basketball player, had played in the NBA, he would vault China into the top of the list.

Compare the stats of Shawn Bradley and Yao Ming.

Seven-Fivers. Next up, are the 7' 5 (226cm) players from Canada (Sim Bhullar), Russia (Pavel Podkolzin) and Senegal (Tacko Fall). If Mamadou N'Diaye had played in the NBA, he would have joined fellow Senegalese Tacko Fall in this list of the 7'5 players.

Class of 7'3 and 7'4. Boban Marjanovic is the tallest NBA player from Serbia, standing at 7'4 (224cm), followed by Lithuania greats Zydrunas Ilgauskas and Arvydas Sabonis at 7'3 (221cm). Puerto Rico's Peter John Ramos, Latvia's Kristaps Porzingis and Germany's Tibor Pleiss are also the class of 7'3 players, tallest from their respective regions.

Table of the Tallest Players By Country 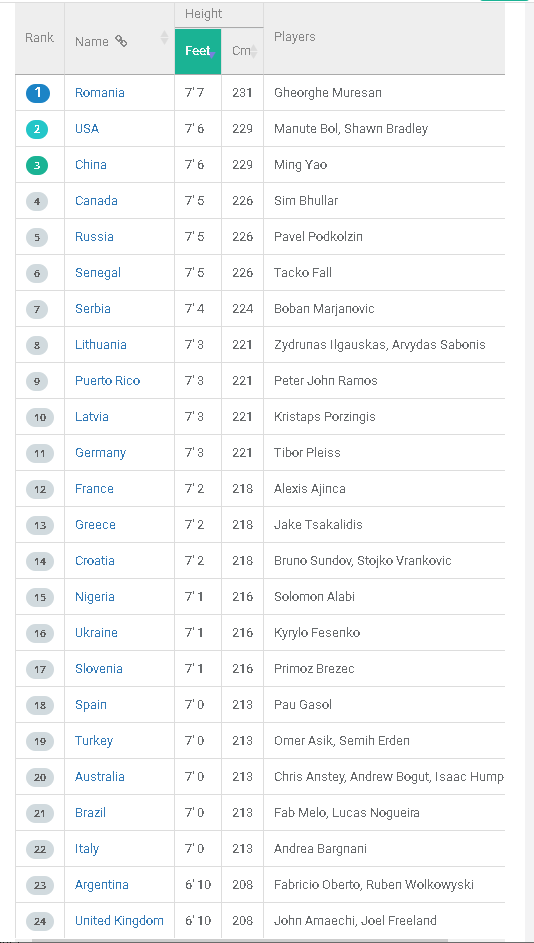 NEXT: The Heaviest Players in the NBA

HelpAboutPrivacy PolicyTerms of Use
2017 © RList - datasets for research and knowledge.