Findings #19-28 - In this last page of our 1,903-idol compilation report, we dwell into our idols' BMIs, blood types and countries of origin. You may also wish to re-visit the previous page, covering Findings #9-18 (Birthdays and Weights).

Part 5: Let's dwell a little into the health of our K-Pop idols. A little worrying..

We will use W.H.O. (World Health Organization) 's body mass index (BMI) classification as a yardstick. BMI is calculated as weight / height2 (kg/m2). 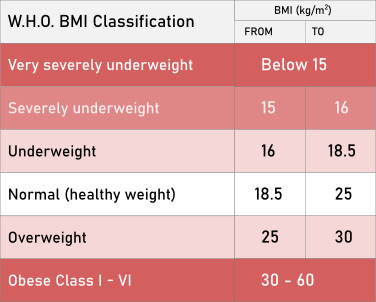 Most (91.2%) of the female K-Pop idols are underweight, of which 9.2% are considered severely underweight!

On the other hand, the better news is that 75% of male K-Pop idols are considered to be in the normal BMI category.

The average BMI value of a male K-Pop idol is 19.4 (normal category).

The average BMI value of a female K-Pop idol is 17.16 (underweight category).

The most common blood type is A.

The least common blood type among K-Pop idols is blood type AB (12%), which is the same percentage for male and female idols when accounted separately.

Part 7: Well, where do they hail from?

96% of our K-Pop idols are from South Korea.

While K-Pop has spread successfully to almost every corner of the world with a strong international fan base, K-Pop idols are predominantly South Koreans at about 96%.

Most of the international K-Pop idols are from Japan, China and USA.

2.1% of the K-Pop idols are from China, followed by 1.9% from Japan and 0.7% from USA. NCT and Varsity have quite a number of Chinese members at 7 and 5 respectively, while Treasure13/Magnum has a good number of Japanese members.

Where the remaining 1% are from

The remaining 1% of our K-Pop idols hail  from Thailand, Taiwan, Indonesia, Philippines and India.

Read again from the Start of the Report

Or visit our pre-ranked lists on these topics:

No attribution sources specified.
...
Flag
Disclaimer :Please be advised that RList does not endorse nor guarantee the completeness, accuracy, reliability or validity of any information published by our member curators herein. For more details, please refer to our Website Terms of Use.
Categories    Home